Recent Results History and impact of the program

Monitoring the overall performance of the screening program and the quality management is one of the key tasks of the Cooperative Association of the German Mammography Screening Program (KoopG). For this purpose, aggregated data from screening units, invitation centers, the epidemiological cancer registries, the reference centers and the Associations of Statutory Health Insurance Physicians are accumulated and analysed nationwide by the KoopG Office.

The results are presented annually to the respective legislators for review and possible improvement in accordance with the legal requirements. Furthermore, the reports are published annually to provide transparency to the public.

The participation rate continuously declined in the years 2013 to 2017 from 57% to 49%, partly due to critical discussions in these years among experts and in public about the benefits and harm resulting from screening. Nowadays, 50% of the invited women participate in the German breast cancer screening program.

Since 2015 about 85% of the annual 2.8 million examinations are so-called subsequent examinations, meaning that the women are participating repeatedly in the breast cancer screening program. Initial screenings occur predominantly among women aged 50 to 54 years old (85% of all initial screening examinations).

On average, 120,000 women are recalled for further assessment. Recall rates differ substantially between initial and subsequent screening examinations (11% versus 3%).

About 32,000 biopsies are performed annually, which corresponds to a biopsy rate of 1.1%. About 17,000 cancers (invasive and in-situ) are detected within the screening program each year, which means that 6 out of 1000 women screened are diagnosed with breast cancer. Cancers detected within the program are often small and without lymph node involvement, resulting in a favorable stage distribution of the screen-detected cancers compared to cancers detected before the screening era.

Further process indicators – such as recall rates, positive predictive values (for mammography and assessment), the number of examinations with repeat views and the number of non-representative biopsies, time intervals between screening mammography and patient information, between the offer of assessment and the final patient information in cases with further assessment – indicate a high-quality service and much reduced negative effects of screening examinations (see Table 1).

So far, a systematic nationwide evaluation of interval cancers has not yet been possible due to issues concerning data protection. Data protection regulation is the responsibility of the individual federal states. Therefore, in each state, the legal foundation for the required data linkage of the screening results with the cancer registries, as well as for the transfer of diagnostic images and information to the screening units, must be established. Record linkage has been possible and was performed in two states, and initial results have been published scientifically (Heidinger et al., 2012, Heidinger et al., 2015,  Bokhof et al., 2018).

The effects of the program on mortality are evaluated independently of the continuous monitoring and evaluation of performance and outcome measures within the program described here. In recent time-trend analyses of age-specific population-based data before and after implementation of the program, screening-eligible women showed more favorable trends regarding the incidence of late-stage breast cancer and breast cancer mortality (Katalinic et al., 2020; Waldmann et al., 2021).

The yearly reports with the results of each screening unit, as well as results nationwide, are available (in German only) at: 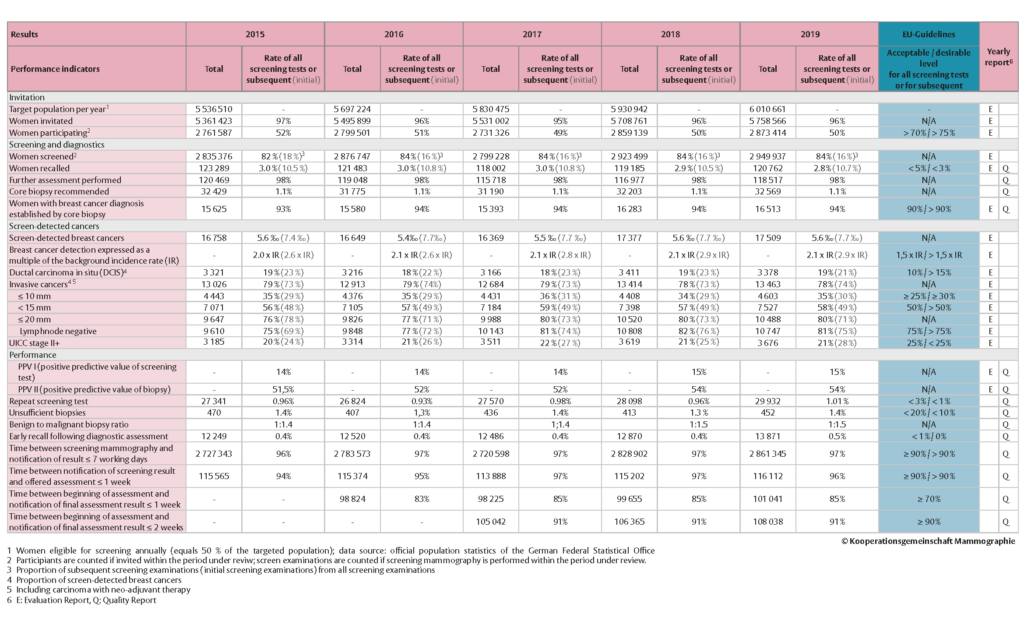 History and impact of the program

Compared to other European countries, the German breast cancer screening program is relatively young. In the 1980s an opportunistic screening of women above the age of 40 had developed. In 2000, this was performed on about 4 million women annually without the mandatory quality management and without the regular evaluation of effects required for screening procedures. Despite the widespread use of mammography, no positive effects on mortality rates could be proven, but many negative effects – such as excessively unnecessary surgical biopsies – were identified. As a result, organized mammography screening was tested in three pilot regions, and in 2002 the German Parliament decreed the introduction of a nationwide screening program in line with the European Guidelines for Quality Assurance in Breast Cancer Screening and Diagnosis. 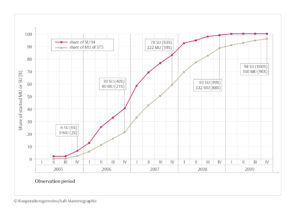 Figure 6: Implementation of the breast cancer screening program with fractions of screening units (SU) and mammography units (MU) established by the end of each quarter

The program was implemented between 2005 and 2009 (see Figure 6). The effects expected on the incidence of breast cancer in the target population are well demonstrated, despite the intensive opportunistic screening preceding the introduction of the program. It can be assumed that opportunistic screening still exists to some extent, although it is not properly quantifiable.

After full implementation of the program in 2009, breast cancer incidences of invasive and in-situ carcinomas decreased. By 2015, the incidence of invasive cancers within the target population has only increased slightly compared to the pre-screening-era, indicating just a small rate of invasive overdiagnoses. Moreover, when comparing the trends relating to incidences of initial and subsequent screening examinations and to the different age groups, it can be concluded that by 2015 the transitory effects during the introductory phase of the program were negligible and the program is at a steady state (see Figure 7). 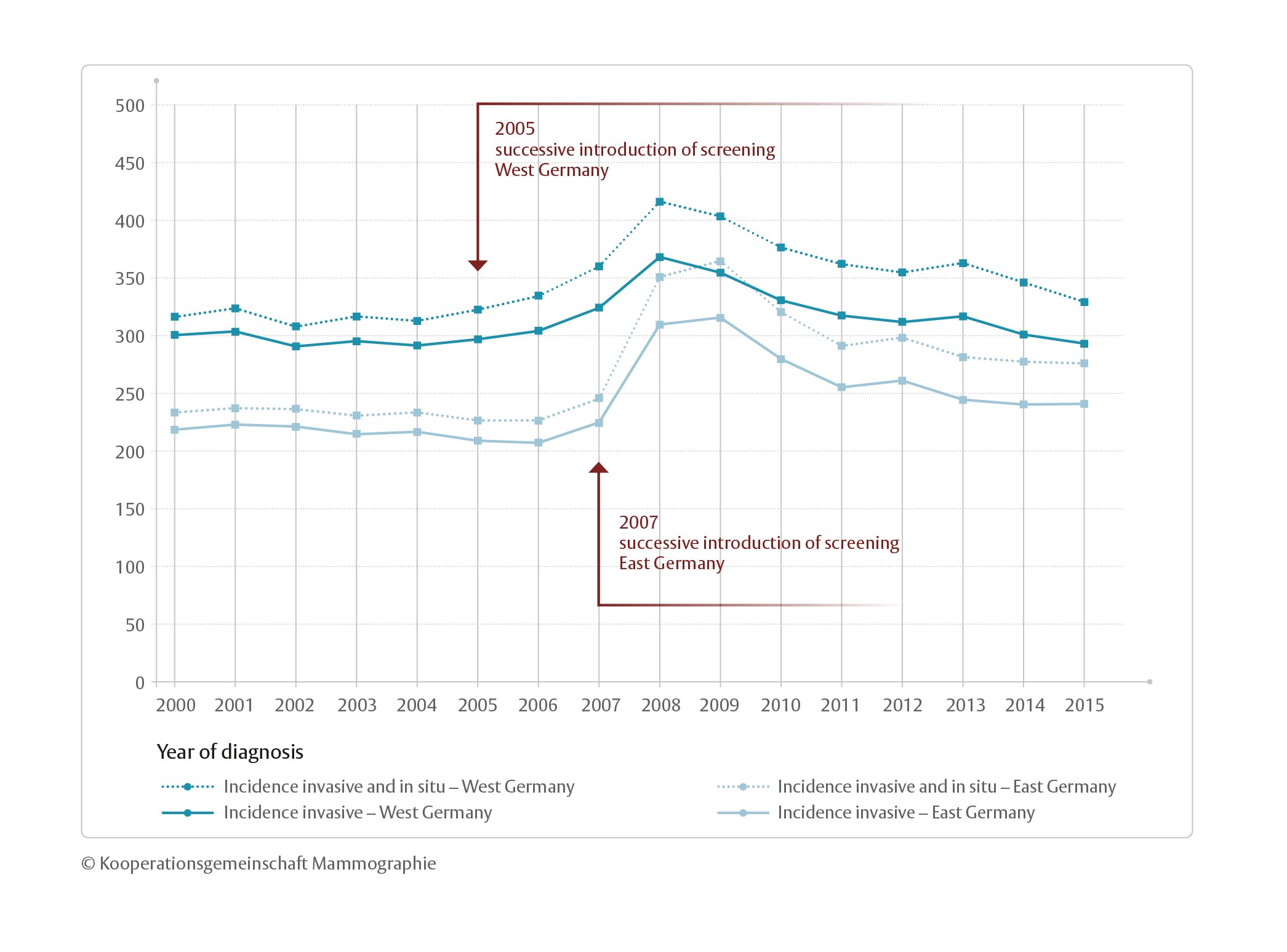 Figure 7: Breast cancer incidence (invasive and invasive + in-situ) trend in Germany before, during, and after the implementation of the German breast cancer screening program

A recent analysis in each federal state of breast cancer incidences among women aged 50 to 69 by the Robert Koch Institute (RKI) shows a decrease in the rates of advanced tumour stages (UICC II/III) following the introduction of the program. By 2013 the rate of advanced tumour stages was significantly lower than before the introduction of the program, indicating a positive effect of the screening program on the target population (see Figure 8). 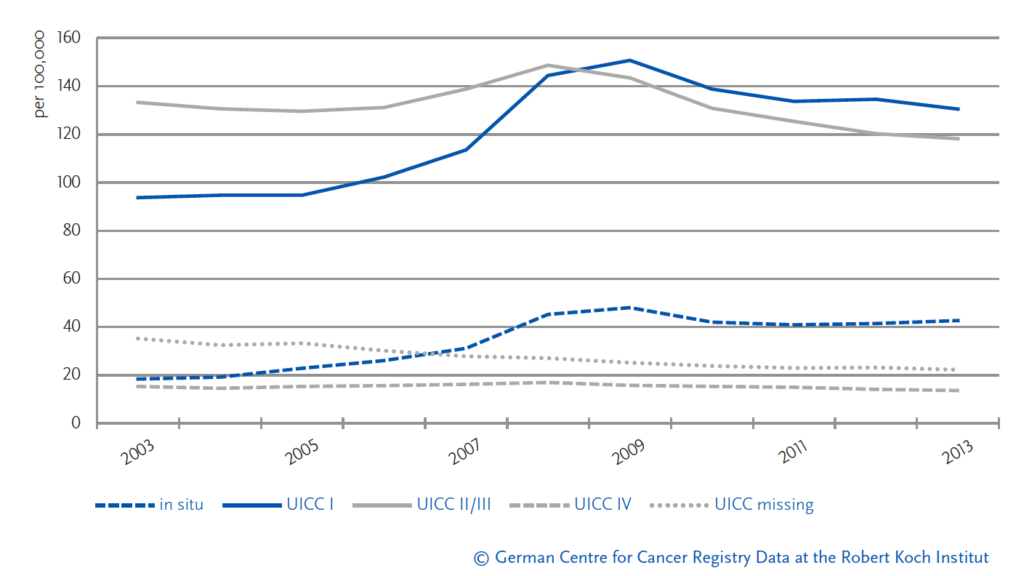 We use cookies to determine the preferences of our users and to provide users with the best possible experience on our website. Information regarding how you can withdraw your consent at any time and further details can be found in our privacy policy.